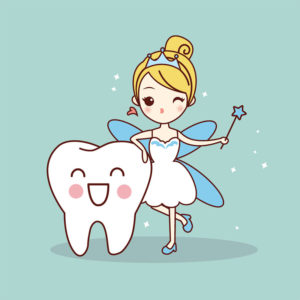 Have you ever wondered how the Tooth Fairy became part of our childhood traditions? Historians have asked the same question and came up with inconclusive answers. Unlike other imaginary characters like Santa Claus and the Easter Bunny whose histories are easy to trace, the Tooth Fairy proves to be more of an elusive creature.

In fact, historians can only guess and piece together fragmented stories that lead back to her. In honor of the upcoming National Tooth Fairy Day on February 28, we thought we’d dig around and see what we could learn about her origin story.

Back to the Beginning

Several old European traditions appear to feature a tooth fairy-like magical being, though none come out and say it was her. In the 19th century, a magical creature would leave small gifts for the lost teeth of French and Italian children while they slept.

Similarly in England at the same time, fairy coins would be left for the peasant girls overnight. In Ireland, rumor had it that fairies would kidnap children at night and replace them with fairies. This odd occurrence was known as a fairy changeling. To stop the fairies from stealing kids, locals would bury baby teeth nearby.

The play “La Bonne Petite Souris,” aka “The Good Little Mouse,” became a hit, featuring fairies, magic and lost teeth. The story is a bit more gruesome than what we typically associate with the Tooth Fairy, but her theme is still present. In the play, a good queen is locked away by her bad king husband. A mouse, who is really a fairy in disguise, visits her and helps her escape through forcibly taking the king’s teeth from him, hiding them under a pillow and executing him. In the end, the queen is finally free.

Following this play, more events lead up to the Tooth Fairy’s claim to fame including:

Raising Her Rates with the Times

Did you know the Tooth Fairy actually keeps up with inflation? When she first started her career she offered a modest 15 cents for every tooth. Now she gives on average $3.70 per tooth to children who participate.

If you are in pain, we offer same day appointments.

All Your Dental Needs Under One Roof

Our new patient special is a great way to give our dental office a try. Pay only $59 for your first cleaning, exam and digital x-rays.